An in-depth exploration of the interaction between mind and material world, mediated by language, image, and making—in design, the arts, culture, and science. 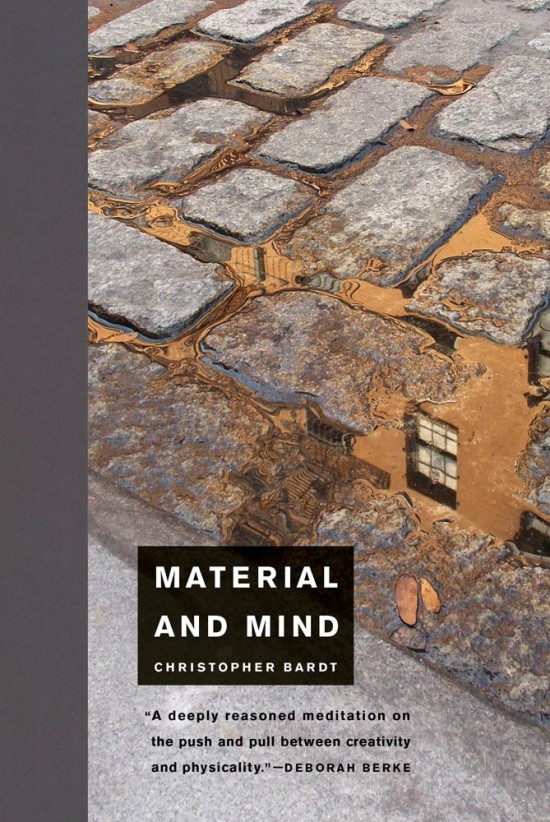 An in-depth exploration of the interaction between mind and material world, mediated by language, image, and making—in design, the arts, culture, and science.

In Material and Mind, Christopher Bardt delves deeply into the interaction of mind and material world, mediated by language, image, and the process of making. He examines thought not as something “pure” and autonomous but as emerging from working with material, and he identifies this as the source of imagination and creative insight. This takes place as much in such disciplines as cognitive science, anthropology, and poetry as it does in the more obvious painting, sculpture, and design. In some fields, the medium of work is, in fact, the very medium of thinking—as fabric is for the tailor.

Drawing on the philosophical notions of the “extended mind” and the “enactive mind,” and looking beyond the world of material-based arts, Bardt investigates the realms in which material and mind interweave through metaphor, representation, projection, analogues, tools, and models. He considers words and their material origins and discusses the paradox of representation. He draws on the design process, scientific discovery, and cultural practice, among others things, to understand the dynamics of human thinking, to illuminate some of the ways we work with materials and use tools, and to demonstrate how our world continues to shape us as we shape it. Finally, he considers the seamless “immaterial” flow of imagery, text, and data and considers the place of material engagement in a digital storm.

“This eloquent book demonstrates the ways that imagination and creativity are intertwined with physical material. Framing the problem of creativity through enactive cognition, it vindicates the precedence of the maker’s embodied engagement with materials across disciplines and historical perspectives, revealing both shortcomings and possibilities for our age of technological obsessions.”

“Do we make our materials or do our materials make us? Architect, author, and academic Christopher Bardt takes the reader on a thrilling and poetic journey through time to deconstruct meaning, making, and what it truly means to be a creative thinker. Material and Mind is a remarkable book from an utterly original mind; it will fundamentally change the way you think about how humans create.”

“Chris Bardt examines the interactions between material and mental phenomena and the essences of the creative process—turning ideas, feelings, and intuitions into material forms. The author draws from the histories of the arts as well as literature and poetry, philosophy, psychology, and neuroscience, and the realities of various artistic practices. He does not attempt to simplify the complexities of the existential and experiential world, but presents the internal interactions and tensions, as well as their inherent uncertainties. An erudite and enticing exploration into the intriguing realm between matter and mind.”

“As digital tools expand formal possibilities and revolutionize construction techniques, Chris Bardt’s Material and Mind is a deeply reasoned meditation on the push and pull between creativity and physicality. Bardt argues that the digital and material should be equal and integrated, reciprocal and balanced. In his view, the very soul of architecture is at stake.”

Deborah Berke
FAIA, Dean of the Yale School of Architecture

“This is an unusual and thoughtful examination of the relationship between what (and how) we think, and the material world, mediated, as the book’s introduction says, by language, image and making in fields of design, the arts, culture generally and science. It also includes a speculation about the relationship with the digital world which is transforming all our lives.

The author is a professor of architecture at Rhode Island School of design, so the book is academic in tone, with appropriate footnotes and indexing. But it is written in plain language, helped by 104 black and white illustrations (by definition colour would have been welcome for his subject). Those chosen are sometimes unexpected, for example showing clay modelling of automobile design at General Motors in the 1940s, or contrasting Roman mosaics with a pixelated portrait of Barack Obama.

It is difficult to convey the rich mix of ideas and questions Christopher Bardt raises in a short review such as this. Suffice to say that they are stimulating and provocative in a constructive way, prompted by neuro-scientific research on the nature of the mind.

To take one example: Bardt describes the ‘peculiar conviction that the imagination functions autonomously’ when it is involved in creative activity via language, pencil, building material and so on, and that media and method are secondary considerations. He quotes the 20th century US writer and philosopher William Gass: ‘things give rise to thoughts, thoughts do not give rise to things, except secondarily as plans for action’. I immediately thought of the architect and his/her relationship to genius loci.

Juhani Pallasmaa endorsed the book, describing it as ‘an erudite and enticing exploration into the intriguing realm between and matter’. Thinking architects should take a look.”

“An extremely interesting read. As an artist, designer and educator I found this book expressing many of my thoughts far more eloquently. The inclusion of research and studies supports the core idea, that material is a medium through which thoughts are generated.

All of this builds to a poignant end in the last few pages challenging our disconnection from material and the lack of resistance such an existence brings.

Highly recommend for anyone who wants to make things.”

Christopher Bardt’s *Material and Mind* begins with a seemingly simple question: how do the materials that we work with shape how we think? His pursuit of an answer takes us from the role of stonework in early civilizations to the contemporary environmental crisis, exploring the unexpected interactions of architecture, ecology, philosophy, art, and neuroscience along the way. Subtle in its thinking and profound in its implications, *Material and Mind* is a truly unique book.

This book was truly pertinent. In a nutshell, the author discusses how materials ‘resist’ and how “in their resistance to our actions they stimulate the imagination and creativity.” He explains in what ways embodied experiences (sensations, manipulations) disrupt the conceptual framework that we have of materials. The back-and-forth between thinking/receiving and articulation/resistance through different material conditions shape our relationship to our environment.

I would recommend this book to anyone who already has some knowledge of art theory and/or philosophy. The book covers a LOT of different concepts rather quickly. The author does a a really good job at explaining each idea with great clarity, but the text remains rather abstract in some sections.

In  the introduction to his book, Christopher Bardt, a professor of architecture at the Rhode Island School of Design, puts forward the hypothesis that we can longer be satisfied with the idea that spirit dominates matter. In fact, the opposite might be true:“our mind and thoughts are continuously formed and influenced by the physical material with which we work and by which we are surrounded” (p.7). In other words,the spoon could bend our minds. The author suggests that considering this entanglement implies straying from the beaten path. This is what Material and Mind sets out to do by a recurring and simple question: “How are ideas, the imagination, and creativity influenced by and intertwined with physical material?” (p. 5). In Bardt’s approach, neuroscience and quantum physics are explored alongside aesthetics and literary studies. The objects he examines include the Ishango Bone (20,000 BC),engravings by Albrecht Dürer, and shapes produced by 3D and 4D printers. The book elaborates on Andy Clark and David J. Chalmers’s philosophical reflection on the extended mind (The Extended Mind, 1998), based on the idea that conscience is not encapsulated in its physical environment – the brain. In fact, the environment permeates the brain as much as the brain is part of its environment.